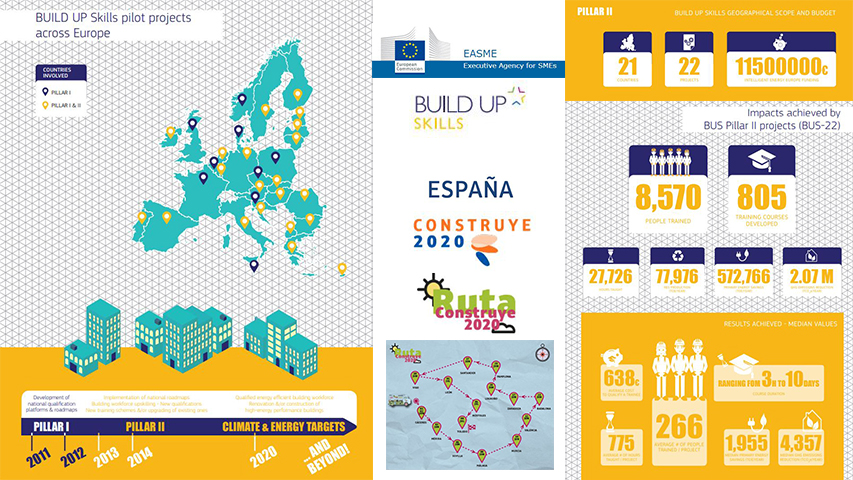 A report by the European Commission highlights the “Construye 2020 Route” as an example of good practice.

“Build Up Skills II has been a successful, relevant, timely and unique initiative. The European projects helped lay the foundations for the training of construction workers, developed innovative and high quality materials, generated a good network and made construction workers and policy makers aware of the importance of energy efficiency and renewable energy systems and succeeded in bringing training in specialised skills closer to blue-collar workers”.

These are the general conclusions of the final evaluation report of the European initiative Build Up Skills Pillar II that the European Commission (EC) has just released this week. The study was carried out by the consultancy firm Trinomics, with the support of an advisory firm, specialised in education and innovation policies, Visionary Analytics for the Executive Agency for Small and Medium-sized Enterprises (Easme) and analysed the 22 Build Up Skills Pillar II projects that were carried out in the European Union, where the “Construye 2020 Route”, led by Fundación Laboral, is also highlighted as an example of good practice.

Starting point: two emblematic initiatives of the EU’s progress in this decade

In 2010, the European Commission (EC) launched two flagship initiatives to contribute to ambitious European objectives that would lead us to the fundamental parameters of the European Union (EU) by 2020: the “Europe 2020” strategy and its roadmap “Resource-efficient Europe” and the “Agenda for new skills and jobs: a European contribution to full employment”.

Within this new panorama that has definitively marked the progress of the EU during this decade, in 2011 was configured the strategic initiative Build Up Skills, within the Intelligent Energy Europe program to promote Vocational Education and Training, Dual Vocational Training and continuous training of professionals in the construction sector in skills specialized in energy efficiency and renewable energy systems. Its main objective: to increase the number of qualified workers in Europe to deal with the rehabilitation of buildings that offer high energy performance, as well as for the construction of new buildings with almost no energy.

To this end, two calls -Pillar I and Pillar II- were carried out, covering the years 2011/2013 and 2013/2016, respectively. Pillar I encompassed projects from 30 countries (the 28 countries of the Union, the former Yugoslav Republic of Macedonia, and Norway) that focused on knowing the individual situation and needs in each state.

In Pillar II, a total of 22 projects were funded to help implement the roadmaps developed in the 21 countries of origin, i.e. to design and implement new qualification and training schemes and to update existing schemes. Other milestones noted in the report are:

The Fundación Laboral de la Construcción was the entity that led both stages in Spain, through the projects Build Up Skills Spain (Pillar I) and Build Up Skills Construye 2020 (Pillar II). And it maintains its leadership with the continuation of the Build up Skills initiative promoted by the EC, through the research and innovation programme in construction skills Horizon 2020 and the Construye 2020+ project.

This report highlights examples of good practices, including the campaign to disseminate and raise awareness of the best practices in energy efficiency and energy renewal, which was carried out in Spain, with the Construye 2020 Route. The Construye 2020 project thus toured 15 Spanish cities during the months of June and July 2016. At each stop, representatives of the Fundación Laboral de la Construcción presented the project to local authorities in a public event and answered citizens’ questions regarding energy efficiency and renewable energy in buildings.