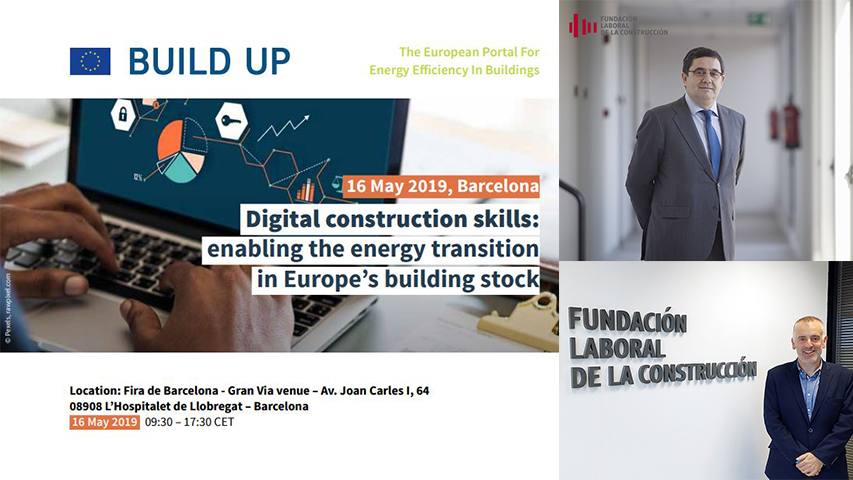 The European Commission, with the collaboration of Fundación Laboral de la Construcción, is promoting a workshop organized by Easme and Build Up -the European Portal for Energy Efficiency in Buildings-, in the framework of Construmat’19.

Fundación Laboral de la Construcción is collaborating with the European Commission (EC) in the international Build Up workshop -the European Portal for Energy Efficiency in Buildings– on digital competences as facilitators of the energy transition of the European construction park, organised by the Executive Agency for Small and Medium-sized Enterprises (Easme) on 16 May, within the framework of the Barcelona Building Construmat exhibition.

From January 2021, all new buildings will be almost zero energy buildings and existing ones will have to be rehabilitated and binded to European standards more quickly if Europe is to achieve its ambitious climate and energy targets.

More than 20 European experts will take part in this conference, which will be opened by Patrik Kolar, Department Head “Life and H2020 Energy, Environment, Resources” of Easme (EC), together with Enrique Corral, Director General of the Fundación Laboral, who will talk about the role of competences in the transition towards a sustainable construction sector.

In addition, other representatives from EC will participate, such as: Pau Garcia Audi, in charge of Policies at the Directorate General for Energy, which will deal with support for the digitisation and modernisation of buildings in the European Union (EU), from the revised directive on the energy efficiency of buildings. And Roman Horvath, Policy Officer of the Directorate General for Internal Market, Industry, Entrepreneurship and SMEs, who will address the issue of digital innovations as a lever for transformation in the construction sector, as well as supporting EU policy initiatives.

In two round tables, European experts will debate, on the one hand, digital innovation, the meaning that professionals give to the construction value chain and the changes that are taking place in the design and construction of buildings through digitalisation. On the other hand, on how to improve the skills of building professionals for the energy transition, the challenges of training to design and build energy-efficient buildings using digital technologies, the integration of the new model into existing qualification systems, the role of certification and the mutual recognition of competences in Europe.

Javier González, Head of International Projects at Fundación Laboral de la Construcción, and Amandine De Coster-Lacourt, Project Advisor at Easme, will present national and pan-European approaches, along with other speakers.

In addition, an overview will be made of the progress made to date in improving industry qualifications in energy-efficient buildings, as well as the new measures needed in this area. It will be complemented by a demonstration of innovative technologies in the construction sector.

The organisation expects more than 80 professionals to attend this free workshop – which will offer simultaneous translation from English into Spanish – for which registration is a mandatory requirement.

By 2020, almost 800,000 people will have completed 13,700 training courses.
Build Up Skills is a strategic initiative launched under the Intelligent Energy Europe programme to promote, through national projects, continuous or complementary education and training of craftsmen and other construction workers in the field, as well as installers of systems in the construction sector for sustainable building.

So far, 22 projects have been developed along these lines with the involvement of 21 countries, which will make it possible for 795,000 people to have attended around 13,700 training courses by 2020. And the horizon goes further, as the EC continues to support projects of this type to build a “green future”.

Fundación Laboral de la Construcción is the leading entity in Spain that has coordinated, since 2011, the projects Build Up Skills Spain (2011-2013) and Build Up Skills Spain “Construye 2020” (2013-2016), both belonging to the Intelligent Energy Europe (IEE) programme, the second part – with its “Ruta Construye 2020” – being recognised by the EC as a “successful, relevant” initiative and an example of good practice.

From 2018 to 2021, it also heads a third Spanish phase, belonging to the Horizon 2020 excellence programme: the Construye 2020+ project. This initiative will take advantage of the Catalan meeting to celebrate one of its working meetings with the Commission’s partners and technicians on 17 May.

Towards an equal construction industry 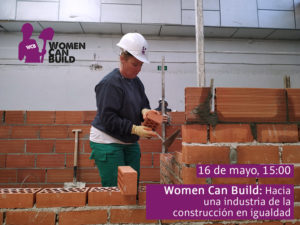 On the other hand, the Fundación Laboral will also be participating in the Talks Arena of Construmat’19 (Thursday 16 May, at 3 p.m.), with another of its European reference projects, Women Can Build, with which it will participate in a round table to analyse the needs, obstacles and benefits of going “towards a construction industry on an equal footing”. This debate will be enriched with the participation of the president of Barcelona Building Construmat, Ana Vallés; the person in charge of the project Women Can Build, Beatriz Oliete; the general secretary of CCOO de Construcción y Servicios Catalunya, Aurora Huerga; the secretary of Construction Sector and Related UGT FICA Catalunya, Juani Arenas; and the general secretary of the Association of Developers and Builders of Buildings of Catalonia (APCE), Eulàlia Tort.